For the third time, one of my books has won an award. Twenty Seven Book 2, Discovery is a 2021 Finalist in the Book Excellence Awards in the Young Adult category.

In Book 1, The Hunt of the Twenty-Seven series fifty-six-year-old treasure hunter Gilbert Morgan an underwater thorny plant which restores his body back to that of a twenty-seven-year-old.

In Book 2, Discovery, the Morgan’s have successfully commercialized the plant and now, ten years later are as equally wealthy as their nemesis William S. Bates. The Morgan’s are surprised when Bates pops back into their lives until they discover his diabolical scheme to ruin mankind. Only the Morgan’s will be able to stop him.

Find out what a world with no aging can be like in this fast-paced thriller designed to keep your heart pounding. 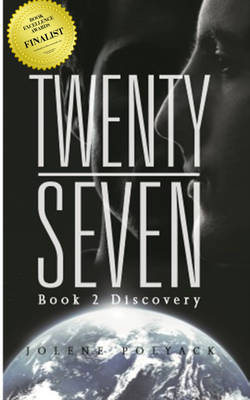 ​
Here's The Latest Review of Twenty-Seven!

​What would you do if you discovered a secret cure that would never let you grow old? In Twenty-Seven: Book 1 The Hunt, diver Gilbert Morgan wrestles with this opportunity when he discovers an aquatic plant that mysteriously makes him youthful again.

Gilbert Morgan has unexpectedly undergone an age-reversal process after accidentally cutting his hand on a seemingly normal aquatic plant. Completely baffled, he seeks more information on it and plans to profit from it as soon as possible. However, when billionaire William Bates discovers the plant’s properties and intends to use it for less than honorable means, an epic struggle breaks out between the two men for the plant.

Gilbert’s adventure moves rapidly with no time to waste, dealing with sudden attacks, strained relationships with his loved ones and a thrilling race against a power-hungry billionaire. The growth in Gilbert’s relationships and character was especially exciting to read about and it is almost impossible not to connect with and relate to him. The book also has many unexpected twists and turns that propel the story towards an exciting cliffhanger and is sure to keep readers coming back to read the next book in the series.

Captivating and mysterious with a high emphasis on sci-fi elements, Twenty-Seven by Jolene Polyack is an exceptional piece of fiction. Highly recommended!

- Review by the Book Excellence Awards

I received another Book Excellence Award!

For the second year in a row, one of my books has won an award!  I am incredibly excited to announce that I have been recognized as a Book Excellence Award Finalist for my book, Twenty-Seven Book 1 The Hunt in the Young Adult Category.

Out of hundreds of books that were entered into the Book Excellence Awards competition, my book was selected for its high quality writing, design and overall market appeal.
Click here to view my complete award listing.

The book was released in 2016 and is about a salty treasure hunter who stumbles upon an oceanic plant that reverts the human body to youthfulness.   The discovery launches a fast-paced chase to steal the amazing plant from its rightful owner.
​
The book is perfect for young adults and those who enjoy a fast, high intensity read.
You can get a copy for yourself on Amazon.

The story behind Twenty-Seven

The idea for the Twenty-Seven series began as I watched an elderly lady walk with difficulty.  I wondered what she would have looked like as a young adult, walking upright with purpose and pose.  After I created that image in my head, I looked around at others and tried to do the same.  My next thought was asking myself what would it be like if everyone looked the same age regardless of what age they actually were.

The idea percolated in my mind for several months.  I decided to write a fictional novel about such a world but was stuck.  I needed an initial thing that would make people regress to a younger age.  I needed a fountain-of-youth discovery of some sort.

Finally, and unexpectedly, after reading the book The Epic of Gilgamesh, I had my catalyst.  These two sentences provided me with the completed story-line in my own novel:

“I shall reveal a secret thing, it is a mystery of the gods that I am telling you.  There is a plant that grows under the water, it has a prickle like a thorn, like a rose; it will wound your hands, but if you succeed in taking it, then your hands will hold that which restores his lost youth to a man.”

Enter Gilbert Morgan (the ‘Gil’ of course inspired from Gilgamesh) and his treasure hunting boat Siddhartha.

I gave the boat’s name after Siddhartha by Hermann Hesse.  The main character wonders for decades to find the meaning of life.  This seemed appropriate for a treasure hunter’s primary mode of transportation.

I hope you enjoy the books as much as I enjoyed writing them.  Book 1 was written in the parking lots of soccer fields while I waited for my son to complete his practices.  I used an iPad with a keyboard propped on the passenger front seat, locked in the down position to complete the first manuscript.
Proudly powered by Weebly
UA-80376508-1