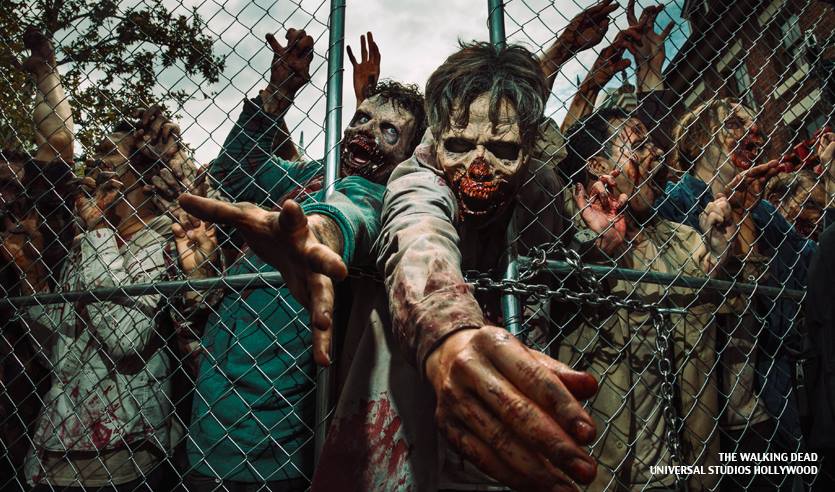 The LIfe of a Walker

​Turns out, being a zombie isn’t all it’s cracked up to be.  One would think that acting mostly-dead would be easy, right?  Wrong.  First, you have to audition.  How?  We asked John Murdy, the Creative Director at Universal Studios Hollywood (USH).  His latest project is the new The Walking Dead attraction which opened at the park on July 4, 2016.  For non The Walking Dead fans, zombies on the hit television series with the same name are called ‘walkers.’   Murdy explained, “At the audition, we ask the performers to do movement exercises.  We organize them into groups, evaluating if they’re scary, how they physically interact with the others and with their environment.  You need to be in control of your body, that’s really important.”  Control your body so that it appears that you can’t control your body.  Check.
Once casted, walkers must attend Walker Boot Camp.  Here, they’re taught to move like walkers.  For the attraction, USH brought in walker guru and the director/executive producer of the television series Greg Nicotero.  Bragging rights for California, it was Nicotero’s best class of walkers he’s ever taught.  Attend walker school.  Check.
Murdy expanded on Boot Camp, “One of the things we ask them to do is challenge themselves to find the inner walker within.  They need to think about themselves as a character before they turned into a walker.  How did you die?  How you died effects how you move.  In essence we’re asking them to create a back story for their character within the confines of what’s been defined on the show.  By doing that, you empower your own performers to bring their own creativity to it and they have more ownership of it and generally it’s more interesting visually.  At this point we call them scare-actors.”  Channel a living character and then apply that to a not-so-living character.  Check.
You’ve auditioned, attended boot camp, channeled your walker self.  Now what?  Murdy said the actors must train physically.  It takes a great amount of endurance to keep up the walker persona.  While we were at the attraction, there were at least 100 walkers outside in the sun with full makeup and costumes attempting to break through a chain link fence.  They made all kinds of walker sounds and did not stop for a full 45 minutes.  And yes, they were convincing.  But 45 minutes is not a full shift.  Actors at USH must be convincing for long periods of time.  In order to make those creepy sounds consistently they’re prerecorded and are controlled by the actor.  Train for a marathon.  Check.
Do walkers get paid well?  Murdy quipped, “On a scale of what zombies generally get paid?  Yes.”
The attraction itself is similar to what you would experience at Hobbs Grove or any other Halloween experience.  The difference is that it’s on steroids, you know, Hollywood style.  USH has begun to integrate the actual attraction experience into the long lines waiting to get in.  With The Walking Dead experience, while guests are in line, they’re emerged into the hospital just like in the very first scene of the first television episode.  Within the attraction itself, both convincing animatronics and live actors are used together in each room so that the guest isn’t really sure which one is going to jump out at them.  Spoiler alert:  watch out for the one underneath the staircase.  He’s especially aggressive.  I screamed both times.
If you can keep your eyes open long enough, there are at least nine replicated props from the series including Rick’s sheriff hat and Daryl’s crossbow.
If you haven’t watched the series, you might want to consider watching at least one or two episodes to understand the premise and therefore enhance your experience.
Over the past five years USH has altered over 75% of its park.  If you haven’t been there lately, then it will be a fresh experience for you.  If you go, I suggest obtaining the Front of The Line Pass.  So worth it.  And, if you are interested in auditioning to be a walker, or to play any other role in the park, go to www.universalstudioshollywood.com/auditions.
Proudly powered by Weebly
Photo used under Creative Commons from Betchaboy
UA-80376508-1